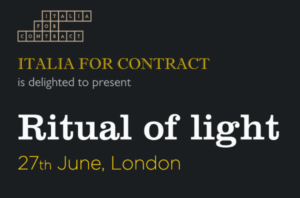 June is the month of the Summer Solstice which marks the begin of summer.
Italia for Contract is delighted to celebrate the magnificence of light, creating an event where the light is the main character which, combined with art,architecture, sound and food, is able to bring into life an extraordinary result.

Crassevig, Frag, Moroso and Pratic, members of the Italia for Contract network, are the companies that exhibit their Made in Italy products which will be presented as a coordinated texture installation for a unique and sensorial experience.

Solstice comes from the Latin language “solstat – the sun stops”, and, in fact, it almost seems as if the sun hesitates a bit in this position before resuming its descending path. The sun reaches its maximum positive declination compared to the heavenly equator and, then, it takes the opposite direction: it begins the astronomic summer.

It’s the time we can capture the most of the solar power: the mystical force that joins the sky and the ground is stronger. This truth was also known by the ancients peoples who seemed to be aware of the the “ley lines”, the mysterious energy lines that digs the earth’s surface and increased their energy load through solar power.

All images copyright of the photographer (©Arno)